Angel Wing™ Truck Side Guard.  Tested by the IIHS to prevent side underride

Truck Side Guards / Side Underride Devices 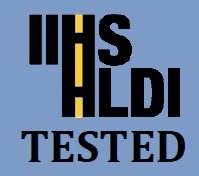 AirFlow Deflector’s AngelWing side impact guards are the only side underride device successfully tested by the Insurance Institute for Highway Safety (IIHS) that prevents Passenger Compartment Intrusion (PCI) at speeds of up to 40 mph.

Side Impact Guards in Summary:

Plan your Side Guard Project 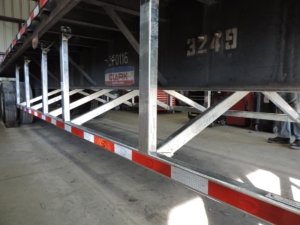 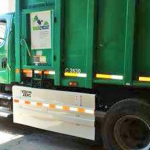 A close-up look at a side guard installed on a flatbed trailer.

Close-up view of AngelWing’s design on a Utility reefer trailer.

Truck Side Guards – One step closer to full implementation.

Installing AngelWing in under 2 hours without special tools.

It’s what’s behind the skirt that saves lives – Video

Watch what happens when weak side guards are installed.  In this case, there were no injuries. 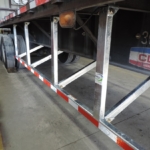 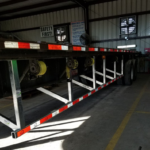 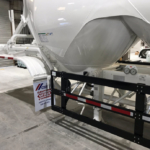 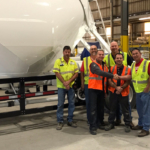 AngelWing’s Side View before a crash test at 40 mph. 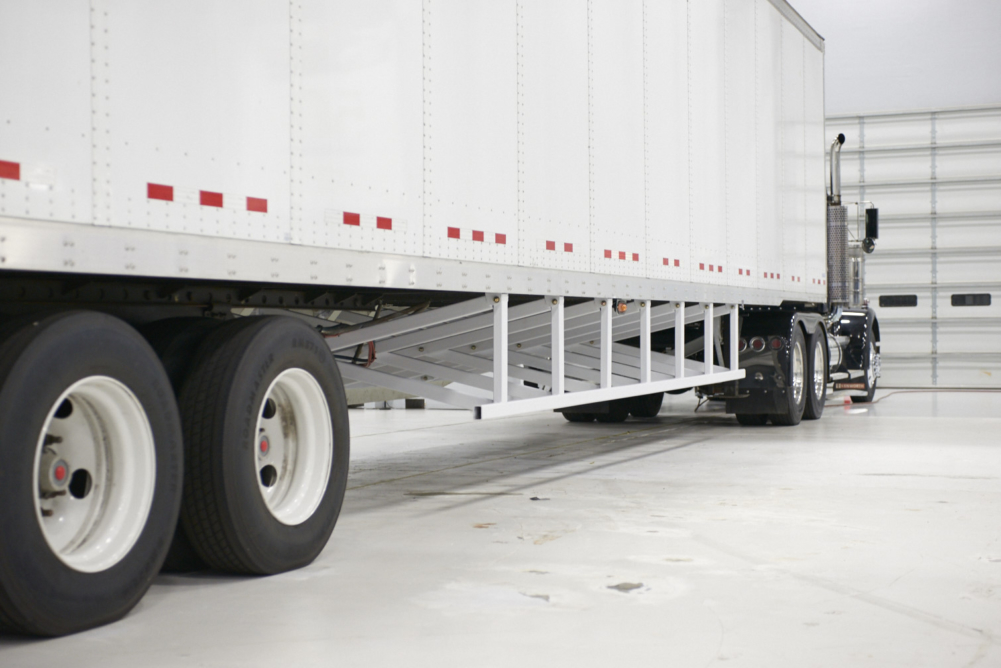 AngelWing’s Side View before a crash test at 40 mph.

AngelWing’s side view after a crash at 40 mph. 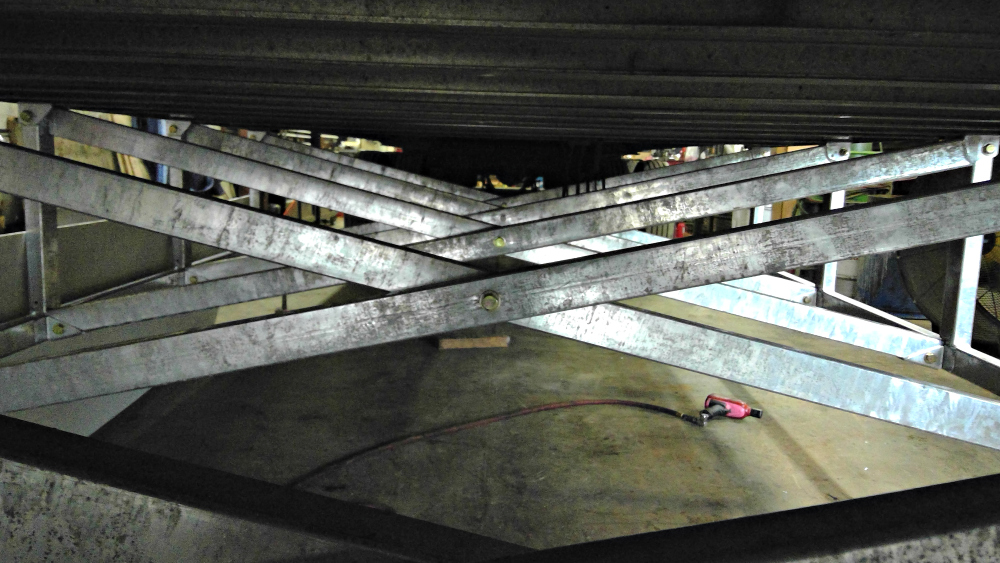 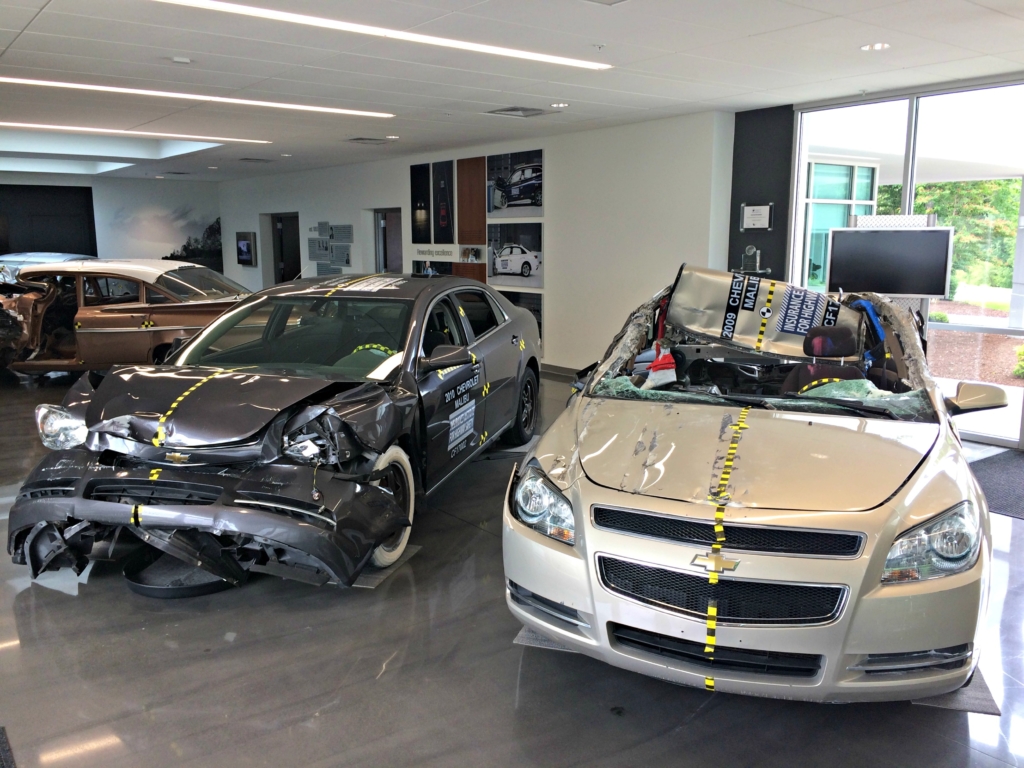 IIHS AngelWing Crash Cars on display at the IIHS Testing facilities in Virginia. 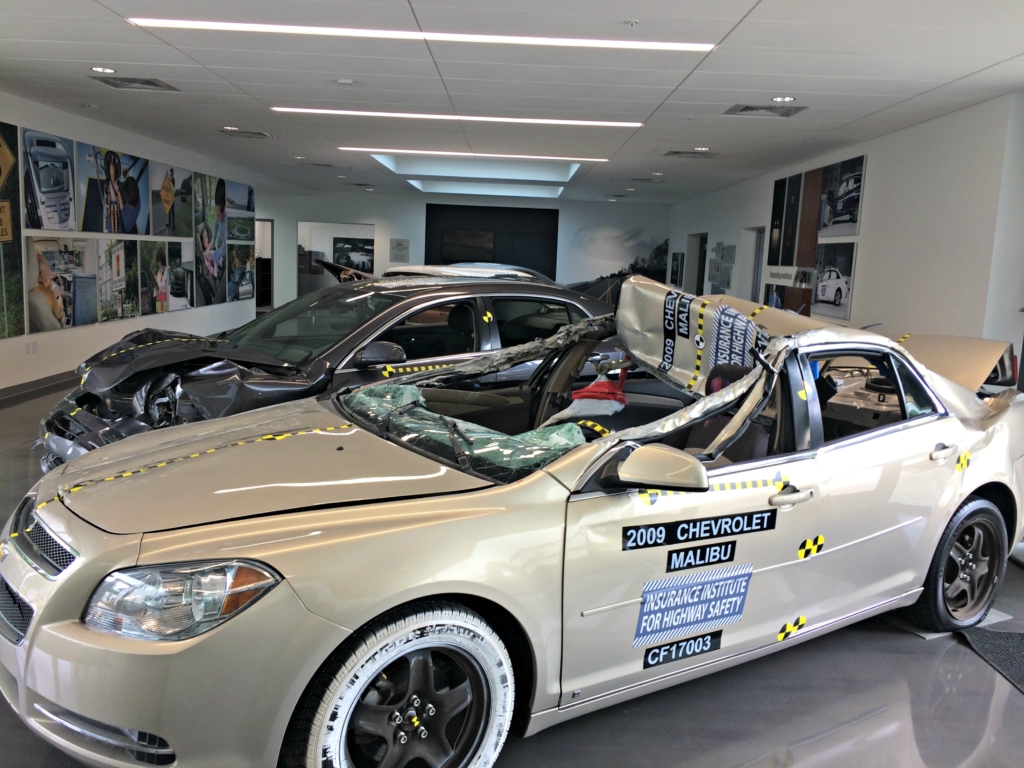 Side underride protection device without a side composite skirt.

AngelWIng side underride solution after impact. 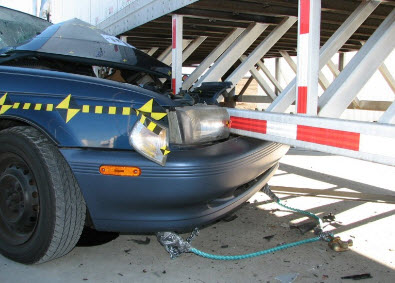 AngelWIng side underride solution after impact. 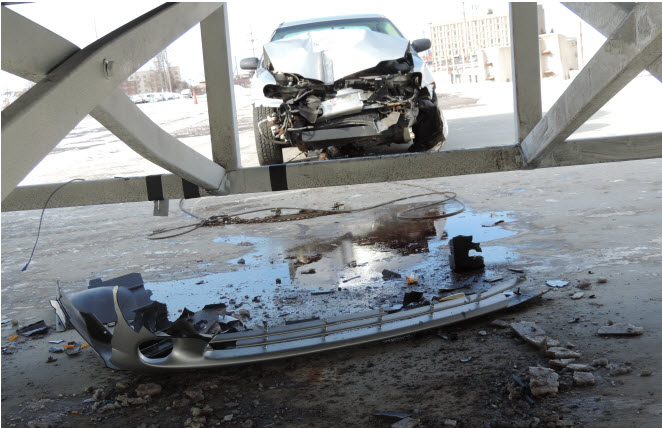 AngelWIng side underride solution after the impact.  Vehicle occupants would have walked away uninjured. 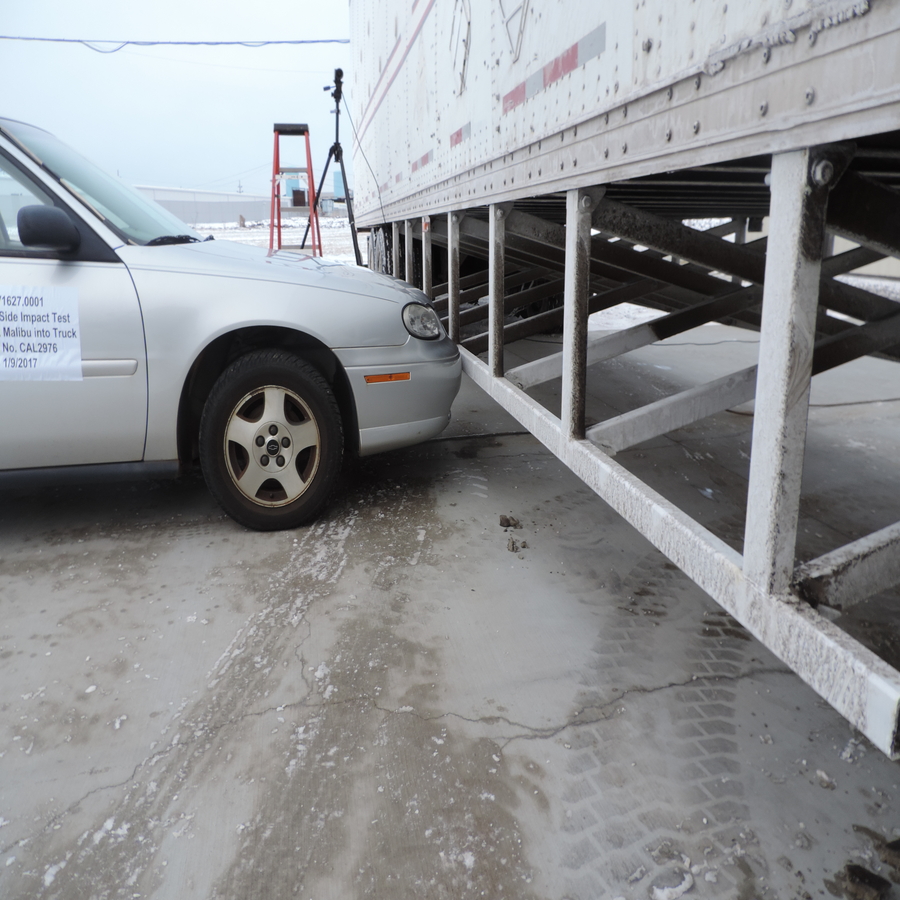 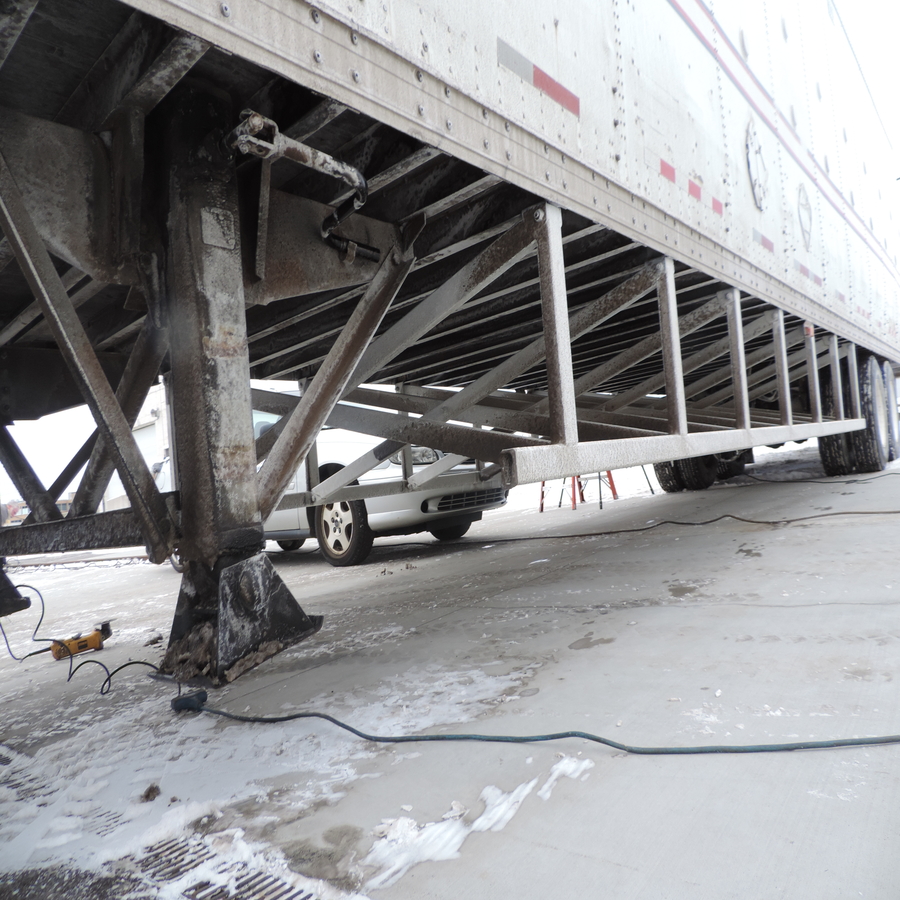 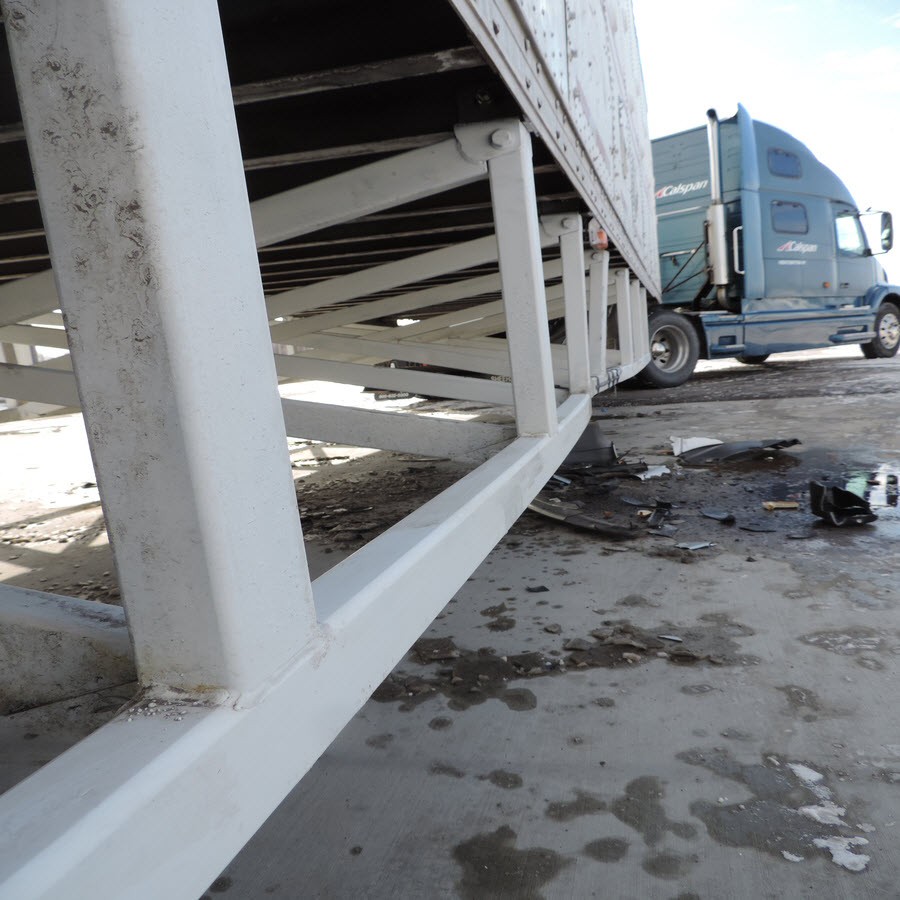 Side angel – AngelWing side underride solution.

History and Background of the Issue

Federal law requires large trucks to have rear underride guards but not side underride guards. At least three U.S. cities, Chicago, Boston, and New York mandate side guards on city-owned and/or contracted trucks as part of Vision Zero initiatives to eliminate crash deaths and injuries, particularly among pedestrians and bicyclists. There are currently no side underride laws in place for large semi-trailer and other large sized trucks that share our roads and highways today.

Many people believe that that side skirts found on many large transport trucks are in fact side underride protection devices and should a side collision occur between a passenger car and the side of a semi-trailer, this fiberglass skirt would offer protection to the vehicle occupants.

The immense size and weight of large transport trucks can result in devastating results for a passenger vehicle and its occupants should a underride collision occur.  According to NHTSA data, 73% of all fatalities in a truck accident in 2014 were the occupants of other vehicles.  In 2015, White House and DOT issue call to action to data scientists and public health experts as 2,348 more people died in crashes than in 2014.

As the number of truck crashes and the resulting injuries and fatalities continue to rise, addressing truck safety issues is integral to making our highways safe again. In 2015, 4,067 people were killed in crashes involving large trucks, representing a 20 percent increase from 2009. This is the first time truck crash deaths have exceeded 4,000 since 2008. Further, early release data for 2015 shows that there were 415,000 truck crashes, which resulted in 116,000 people injured in crashes involving large trucks — an increase of 45 and 57 percent since 2009, respectively. The annual cost to society from crashes involving commercial motor vehicles is estimated to be over $110 billion.

What is a side, rear or front underride crash?

Few truck accidents are more destructive than those that involve a passenger car which gets lodged or pinned underneath a large transport truck. The tractor trailer bed is often higher than the hood of a standard vehicle which when a side, front or rear underride crash occurs, the car goes partially or completely under a truck or trailer. This significantly increases the chance of severe injury or death as most safety accessories and devices like airbags, anti-avoidance technology, and other type equipment are rendered ineffective because of the difference in heights between transport trucks and regular passenger vehicles.

What can be done to prevent this type of accident?

As seen in the video shown on the previous section, the two tests involved a midsize car striking the center of a 53-foot-long dry van trailer. The difference between the two tests was that the crash with the side underride protection device (AngelWing)  didn’t allow the car to penetrate the underride and go underneath and strike the trailer.

The end result was that the vehicle’s safety devices (air bags, safety belt, and crumple zones) could properly restrain the test dummy located in the driver seat. In the second test, with only the side fairing skirt and no side underride protection device, the car traveled underneath the trailer, slammed into the windshield and impacted the side of the trailer.  If the semi-trailer was in motion, the car could have possibly flipped the trailer, come into contact with the rear wheels, or both, risking the life or the semi-trailer occupants as well.

The resulting impact sheared off part of the roof, and the vehicle became wedged beneath the trailer. In a real-world crash like this, any occupants in the car would likely sustain fatal injuries.

In summary, trailer fairing skirts are specifically designed to control the flow of air underneath the semi-trailers and reduce fuel consumption and not engage safety features of vehicles such as airbags, crumple zones or anti-avoidance technology (if equipped).  Should an impact occur, the car will breach the skirt and travel underneath the trailer and passenger compartment intrusion (“PCI”) will occur, possibly causing life-altering injuries or death.

How do truck side guards work?

Truck side guards or Side Underride Protection Devices are attached directly to the cross member of the semi-trailer body at specified intervals.  Upon impact, the structure engages and deploys the vehicle’s built-in safety features such as airbags, anti-avoidance sensors, crumple zones or seat belts, designed to protect its occupants from possible injury or death.

The end result is that the side underride protection device provides a stable structure which prevents the car from traveling under the trailer and engages the safety features of the vehicle.  This combination protects all vehicle and truck occupants should a side collision occur.

Do I need to replace my fuel-saving, side fairing skirt?

AirFlow Deflector Side Guards are designed to work and integrate with most fuel saving side fairing skirts available in the marketplace. The end result is that users can maintain their current fuel efficiency levels and SmartWay™ certification (if applicable).

Should a fuel savings skirt be needed, we work with most companies or one can be supplied through AirFlow Deflector.  Please contact AFD or your dealership for further details.